QR Codes in the Wild

Following our post about QR codes last week, we wanted to share some sightings of 2D barcodes in their natural habitat. The way we’re seeing these codes used is giving us lots of food for thought about what’s cool, what’s cutting-edge… and what doesn’t work.

Exhibit A: Gas station in Miami 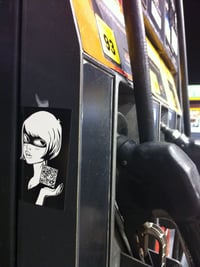 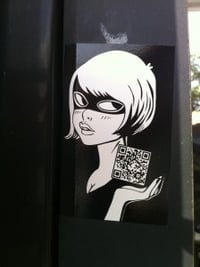 What works: Our chief tech officer said, “What was cool about it was there was no text on it at all, so you got a little buzz knowing that most people wouldn’t even know what it was. Exclusivity based on cutting-edge technology.” If you surround the code with an air of mystery, you can get scans simply based on the mystery alone. This is a great example of a guerrilla approach to QR code usage.

What to watch out for: Well… the obvious. If there’s no other text or recognizable brand mark, your entire impression depends on people being willing (or having the ability) to scan. That’s the guerrilla gamble.

What it linked to: http://www.kneetoface.com/ 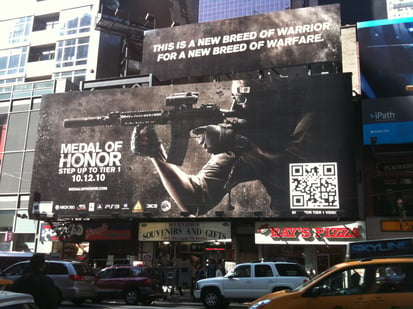 What works: It’s big, it’s bad, and it’s begging to be scanned. The target audience is right: if you’ve got a fancy gaming console, chances are you (or your mommy and daddy) own a smartphone.

What to watch out for: Standing in front of the billboard, I couldn’t have scanned this thing even if I’d had a gun to my head (which, by appearances, was entirely the case). I tried three different smartcode readers, and wandered back and forth across 7th Ave trying to get it to work. Only when I uploaded the photo to my computer, then pulled out my phone, could I scan it from the comfort of my desk. Not exactly effortless… and if I hadn’t been planning this post, I probably wouldn’t have bothered. The A for effort doesn’t go to Medal of Honor – it goes to the few, the brave, the 17-year-olds who actually photographed the billboard to scan it later.

What it linked to: http://tier1-nyc.com 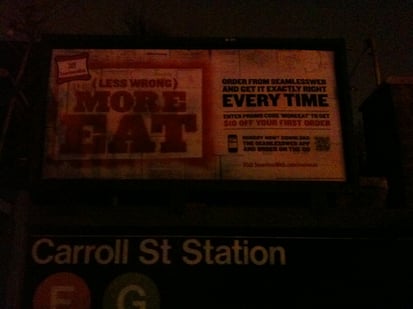 What works: In a foodie-centric neighborhood in Brooklyn, this poster Seamless Web has the demographic right. New Yorkers heading for their subway ride home after work (if they haven’t already eaten on restaurant-heavy Smith street) catch a reminder of their favorite way to make dinner: outsourcing. In addition to the QR code, the surrounding messaging is clear and locally resonant.

What to watch out for: First, the code was small. Too small to scan. That’s always a risk with QR codes. And the billboard wasn’t well-lit at night, but Metropolitan Transport Agency deserves the bulk of that blame. Still, something to consider as you’re planning your next big QR campaign. The bigger error was something that every savvy New York advertiser should know: DON’T BLOCK THE STAIRS. Passing under this sign and imagining myself amid a crowd of rushed commuters, I saw only one thing: some poor slackjaw blocking traffic while trying to scan the code. So while the campaign itself was well-placed, it would have been much more effective inside the station on the subway platform. Stairs, especially NYC stairs, aren’t the place to ask people to scan a QR code.

What it linked to: Too small and dark to scan, and I wouldn’t dare transgress the “no stair blocking” rule in any case. Couldn’t scan from the photo, for obvious reasons. 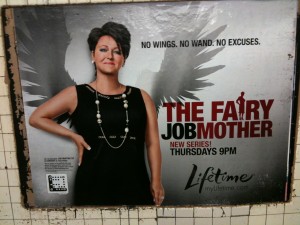 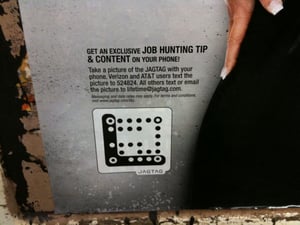 What worked: Commuters would have ample time to scan this code while waiting for their trains. For that reason, subway platform code sightings are great.

What to watch out for: On an underground platform, there’s no internet connectivity. So for all our joyful scanning, we couldn’t actually access any of the tag’s content in realtime. Furthermore, Lifetime chose to use a proprietary smartcode format – the JAGTAG. The JAGTAG format can’t be read by smartcode readers… which minimizes the already segmented (though growing) audience of individuals who know about QR codes and how to scan them. You’ve got to take a photo of the code and then email or MMS it via Verizon or AT&T. If you’re used to the instant gratification of a standard QR scan, that’s a whole lot of effort for a bit of extra content.

What it linked to: On phone, opens a YouTube video with job tips. Via email, sends a link to the video (which starts to download itself when you click): http://bit.ly/aEYzxb 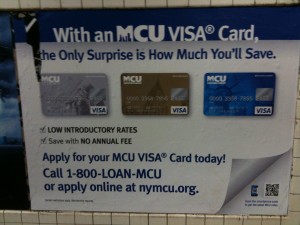 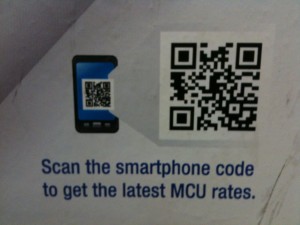 What worked: Big, easy to read code in a high-traffic location with lots of people looking for something to do as they wait for the subway. Visual queues let users know to scan the code with their phones. This would have been much better on an elevated subway platform where people could actually respond to the call to action.

What to watch out for: Underground without internet connectivity, as above. The other leap in faith here had to do with the target audience. MCU (Municipal Credit Union) is targeting lower-income individuals and potential loan applicants. Probably not the most likely smartphone-toting crowd.

What it linked to: http://r.beetagg.com/?46oko1
(just the MCU website… not even a mobile version of the site)

It’s understandable that lots of brands want to get on the QR code bandwagon, but marketers need to pay close attention to detail. Location, target audience, brand recognition (or hiding the brand), visibility: all of these Marketing 101 factors become even more important when the call to action is as immediate, and attractive, as a QR code scan.