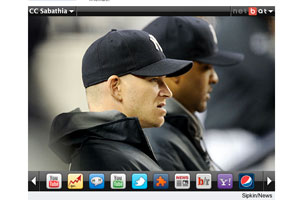 “We as marketers and communicators are continually yearning for new ways to engage our consumers.”

Bonin Bough, director of digital and social media at PepsiCo, is heading up a search for innovative means to reach audiences. They’ve signed up for an experimental effort with a company called netBAT, a system that turns photos within editorial into sources of additional content on the subject pictured. When you mouse over one of the sponsored photos, contextual buttons appear with all sorts of options for digging deeper. Users can access quotes, recent stats, YouTube videos, and the like. All this is pulled from a database that netBAT created, which maps to 40,000 celebrities and athletes about whom they can display information.

So… cool. netBAT is building apps directly on top of photos. Photos of celebrities, within editorial. But won’t that just make the photos look like another ad? Sure, it’s an interesting photo. But it’s also possible that the experience of mousing over one of these photos to get to the “advertorial goodies” underneath might have a distinctly ad-like feeling.

The solution to Pepsi’s search has at least two prongs. Bough is looking for communication channels that “bridge the paid and earned media with one editorial unit.” He adds,”It has to happen in a way that brings content and conversation.” We’re not arguing that netBAT fails to answer that call. In fact, it looks pretty cool, with the “ad-like” caveat considered. And the online ad publishing industry is in need of a fresh angle. (Endlessly scalable online ad space does, after all, come with a major Econ 101 downside: scarcity and demand equals price. There’s no scarcity online, is there?) From an ideological standpoint, we’re all for it. Enrich existing content by making it a conduit for more information. Do that in a totally integrated fashion, so that the user experience is seamless. But how could we make netBAT an even more relevant tool? (Hint: newspapers aren’t involved)

We have an idea for these guys: why not break out of the pure editorial space and offer this app for all sorts of photos? Not just celebrities, and not just on news pages. Imagine what Facebook could do with an app like this. They’ve got the data. With everyone’s faces tagged. Then the individual becomes the celebrity. And the mouseover gets you to your friend’s recent quotes or news or favorites or whatever. It’s far more personal than the celebrity angle ever could be. And that means it’s meaningful to individuals. The issues of curation, placement, etc. are present, but in our minds totally easy subordinate to the idea that you’re providing a way to enhance users’ own content… which is patently more important to them than anything else (well, their friends’ content is probably pretty high up there too).

On the Pepsi side of the story, we think it’s a great effort. They’ve created a program called the PepsiCo 10 to work with innovative new tech and media firms, and according to Bough the program with BAT (along with their recent deals with Foursquare and Twitter ad network Ad.ly) is meant to serve as a model for how that can work.